Irritable bowel syndrome (IBS) is a group of symptoms including pain and discomfort in abdomen and changes in bowel movement patterns. Doctors call IBS a functional gastrointestinal (GI) disorder. Functional GI disorders happen when your GI tract behaves in an abnormal way without evidence of damage due to a disease.

Studies estimate that IBS affects 10 to 20 percent of adult population in the UK. However, prevalence is thought to be higher than this as many people with the disorder do not seek medical advice*. IBS affects about twice as many women as men and most often occurs in people younger than age 45.

The underlying cause of IBS has not been definitively explained. To the most important factors that play key role in IBS development belong:

Bowel motoric function, also called peristalsis, consist of alternate contraction and relaxation of bowel smooth muscles thanks that food and digested by-products passes through from stomach to the end segment of large intestine (rectum). This process take place unconsciously and it is subject to close control of the nerve and hormonal systems. The disruption of the bowel motoric function in IBS manifests in diarrhoea, when bowel movement is too fast or constipation, when bowel movement slows too much.

More than 50 % of patients with OBS has mental problems, the most frequent are anxiety, low mood, and depression. These mental problems have negative impact on IBS symptoms, and are amplifying abdominal pain even in moderate bowel disturbances. Also stress may amplify pain sensation and disrupt bowel movement.

IBS belongs to the most common diseases of gastro-intestinal tract. IBS symptoms according to IBS diagnostic criteria affect 10 – 20% of adult population. Women are twice more often affected than men. IBS occurs more often in some families and recent research suggests genetic background of this illness.

Recent research demonstrate infectious cause (background) of IBS. Post-infectious irritable bowel syndrome is a common disorder wherein symptoms of IBS begin within some months after an episode of acute gastroenteritis. Post-infectious IBS constitutes from 5 to 32 % of all IBS cases. The mechanisms underlying the development of PI-IBS are not fully understood, but are believed to include persistent sub-clinical inflammation, changes in intestinal permeability and alteration of gut flora.

The main symptoms of IBS include:

There may be days when your symptoms are better and days when they're worse (flare-ups). They may be triggered by food or drink. IBS flare-ups can happen for no obvious reason. Sometimes they have a trigger like: alcohol, caffeine, and certain foods – such as spicy or fatty food, and stress and anxiety

Other symptoms of IBS may also include:

There are no tests for IBS, but you might need some tests to rule out other possible causes of your symptoms. It is important to exclude the other illnesses that may mimic IBS.

The Rome III criteria were introduced in 2006 with the most significant change being the classification of IBS by subtypes. Subtypes were based on stool consistency rather than stool frequency, and included IBS-C (constipation), IBS-D (diarrhea), IBS-M (mixed) and IBS-U (unsubtyped). Another significant change was that the symptom of bloating as a primary symptom was eliminated from the definition. This change was based on the view that bloating as a symptom is so widespread that it is neither sensitive nor specific for IBS alone. A validation study by Ford and colleagues of patients with IBS symptoms who underwent colonoscopy reported a sensitivity of the Rome III criteria as 68.8% and specificity of 79.5%.

Since the release of the Rome III criteria in 2006, research in the field of IBS has surged. These advances in knowledge, along with a desire to make the Rome criteria more clinically useful, resulted in several key changes to the Rome criteria when the fourth iteration was released in 2016. The definition and rationale for the changes are outlined below.

Rome IV defined irritable bowel syndrome (IBS) as a functional bowel disorder in which recurrent abdominal pain is associated with defecation or a change in bowel habits. Disordered bowel habits are typically present (i.e., constipation, diarrhea or a mix of constipation and diarrhea), as are symptoms of abdominal bloating/distension. Symptom onset should occur at least 6 months prior to diagnosis and symptoms should be present during the last 3 months.

Recurrent abdominal pain on average at least 1 day/week in the last 3 months, associated with two or more of the following criteria:

These criteria should be fulfilled for the last 3 months with symptom onset at least 6 months prior to diagnosis.

You should see your physician in order to establish diagnosis of IBS. It is important to exclude proliferative changes (e.g. colonic cancer) and/or other illnesses that could be background of the symptoms. Blood tests, stool tests (microbiological and parasitological) and colonoscopy might be necessary. Your doctor may arrange: a blood test to check for problems like coeliac disease**, and tests on a sample of your poo to check for infections and inflammatory bowel disease†.

*Brian E. Lacy and Nihal K. Patel Rome Criteria and a Diagnostic Approach to Irritable Bowel Syndrome J. Clin. Med. 2017, 6, 99; doi:10.3390/jcm6110099 www.mdpi.com/journal/jcm
**Coeliac Disease – is a long-term autoimmune disorder that primarily affects the small intestine. Classic symptoms include gastrointestinal problems such as chronic diarrhoea, abdominal distention, malabsorption, loss of appetite and among children failure to grow normally.
†Inflammatory Bowel Disease (IBD) – is a group of inflammatory conditions of the colon and small intestine. Crohn's disease and ulcerative colitis are the principal types of inflammatory bowel disease. It is important to note that not only does Crohn's disease affect the small intestine and large intestine, it can also affect the mouth, esophagus, stomach and the anus whereas ulcerative colitis primarily affects the colon and the rectum.

Mental health therapies may help improve your IBS symptoms. Therapies used to treat IBS include (1) cognitive behavioral therapy , which focuses on helping you change thought and behavior patterns to improve IBS symptoms, (2) gut-directed hypnotherapy, in which a therapist uses hypnosis—a trance-like state in which you are relaxed or focused to help improve your IBS symptoms (3) relaxation training, which can help you relax your muscles or reduce stress

*Rifaximin, sold under the trade name Xifaxan among others, is an antibiotic used to treat traveler's diarrhea, irritable bowel syndrome, and hepatic encephalopathy.

Overactive bladder is a pretty common condition that affects both women and men and millions all over the world. Overactive bladder is not a disease. It's the name of a group of urinary symptoms. The most common symptom of OAB is a sudden urge to urinate that you can't control. Some people will leak urine when they feel the urge. Leaking urine is called "incontinence." Having to go to the bathroom many times during the day and night is another symptom of OAB.

OAB prevalence is age related - and increases with the age. It can accompany several diseases like prostate hypertrophy in elderly men and many other just to mention the most common: low back problems, diabetes, Parkinson's disease, Alzheimer's disease, sclerosis multiplex and fibromyalgia syndrome namely.

Experiencing some of listed below symptoms may suggest the OverActive Bladder:

These symptoms could occur jointly or separately. Due to the fact that similar symptoms to these that occur in OAB could produce several diseases one should exclude various other diseases. This could include urogenital infection, kidneys diseases, diabetes and even irritable bowel syndrome. There are two types of overactive bladder:
"Dry" means you have a sudden, urgent need to urinate many times during the day.
"Wet" means you also have the need to pee and your bladder leaks. This is also called urge incontinence.

Overactive bladder syndrome is a diagnosis of exclusion. A focused history, including past history of urogenital disorders, in combination with physical examination of the genitourinary system and relevant pelvic examinations should be performed as there are multiple conditions that can cause or contribute to symptoms of overactive bladder.

The patient should monitor amount of consumed liquids and amount and frequency of urination by keeping this observations in a form of "bladder diary".

*Anticholinergics are divided into three categories in accordance with their specific targets in the central and peripheral nervous system: antimuscarinic agents, ganglionic blockers, and neuromuscular blockers.

In the fibromyalgia course some diseases or problems occur much more frequently than they occur in the general population. This has been presented on the graph below. The prevalence of the various disorders that occur among fibromyalgia population (expressed in percentage) is presented inside internal oval and the prevalence (in percentage) of the same disorders in the general population is shown outside this oval. 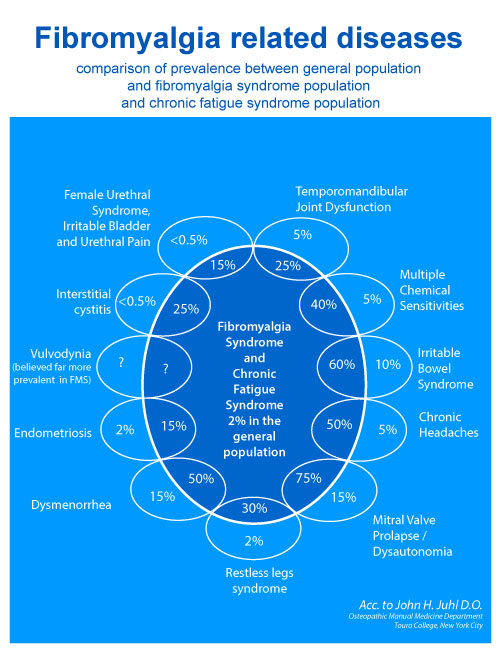