The cause of fibromyalgia still remains unknown. However, several studies are in progress aiming to find out its cause. Significant progress has been made over the last decades regarding the pathogenesis of fibromyalgia. It seems that fibromyalgia constitutes a syndrome* sharing one broad symptomatology† however not having one single cause.

*syndrome – is wider and more general term. It is set of signs and symptoms building clinical picture having various underlying causes. Disease in contrary has one specific cause usually. 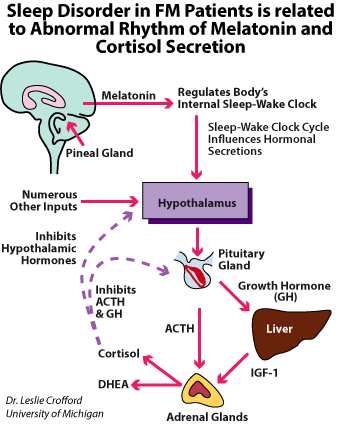 Sleep disorders are one of the most common among various symptoms of fibromyalgia. Fibromyalgia patients report early morning awakenings, awakening feeling tired or unrefreshed, insomnia, as well as mood and cognitive disturbances. Polysomnographic findings during sleep in these patients include an alpha frequency rhythm and presence of abnormal delta waves in non-REM sleep stage, so called alpha-delta sleep.

According to Bennett this could reflect in diminished production of growth hormone (GH) and insulin-like growth factor (IGF-1) that may cause improper muscle function and tiredness.

The effect of that (abnormal GH production) could be predisposition to micro-injuries in muscle fibres and inefficient repair mechanisms and subsequently weaker muscle function. The other authors suggest that the muscle weakness may result from poor energetic muscle reserve due to some amino acids like valine, leucinne, isoleucine, phenylalanine taking part in protein synthesis.

The steroid hormones, cortisol and dehydroepiandrosterone (DHEA) are the two main peripheral secretory products of the hypothalamic-pituitary-adrenal stress-neuroendocrine axis. DHEA in many respects parallels cortisol secretory activity there was some dissociation; however mean levels were positively but not tightly correlated. The secretory pattern of DHEA seems very stable.

The melatonin is a hormone produced by the pineal gland and regulates sleep and wakefulness. Melatonin in contrary is secreted at night with a robust circadian rhythm and maximum plasma levels that occur around 3 to 4 AM. The daily rise of melatonin secretion correlates with a subsequent increase in sleep propensity about 2 hours before the person’s regular bedtime.

There is a hypothesis that the abnormal rhythm of hormone levels (cortisol, melatonin, and DHEA) is responsible for the changes of circadian rhythm of fibromyalgia patients. However, the total value of the daily secretion of these hormones remains in normal range.

In view of the evidence regarding alterations of the serotoninergic system in the pathogenesis of fibromyalgia genetic research was initially directed towards genes involved in modulation of that system. Offenbaecher et al. compared the genotype of the serotonin transporter gene (5-HTT) promoter region in fibromyalgia patients with healthy controls. An increased frequency of the S/S genotype of the 5-HTT gene was demonstrated among patients versus controls.

These results were subsequently confirmed by a study analyzing Palestinian Arabs and Israeli Jews. On the other hand, another study directed at the T102C polymorphism of the 5-HT2A-receptor gene, another serotonin receptor candidate gene, failed to demonstrate a difference in the frequency of the polymorphism among fibromyalgia patients and controls.

Similarly, a study focusing on the serotonin receptor subunit genes, HTR3A and HTR3B found no significant difference in these genes among fibromyalgia patients. 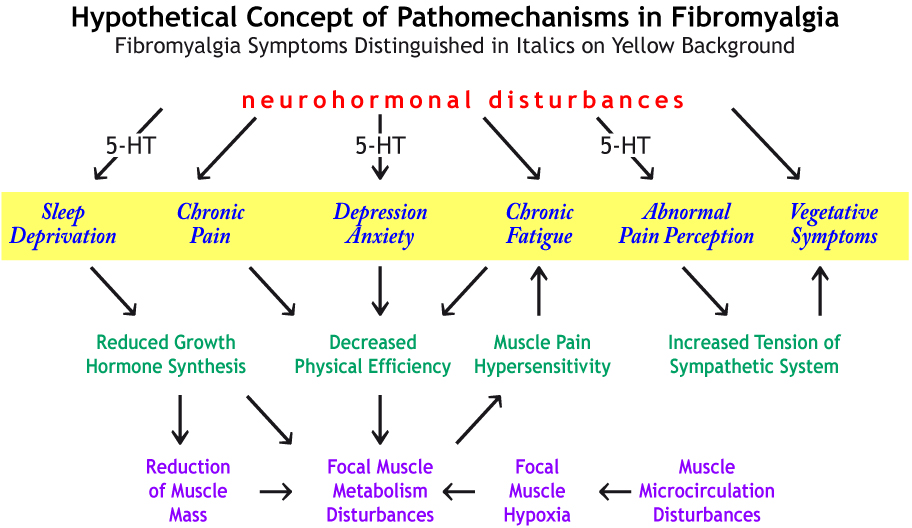 Possible links between neurochemical abnormalities and serotonin (5-HT) deficit and different FMS symptoms are presented in the figure beside. Click the link in order to magnify it → figure

Presence of 5-HT antibodies in serum and high density of serotonin receptors in nerve synapse are specified among various causes of 5-HT deficiency in fibromyalgia. Recently, a defined autoantibody pattern consisting of antibodies to serotonin (5-hydroxytryptamine, 5-HT), gangliosides and phospholipids was found in about 70% of the patients with fibromyalgia syndrome.

Ref.:Klein R, Berg PA: High incidence of antibodies to 5-hydroxytryptamine, gangliosides and phospholipids in patients with chronic fatigue and fibromyalgia syndrome and their relatives: Evidence for a clinical entity of both disorders, Eur.J.Med.Res. 1(11):1995,21-26.

Fibromyalgia is a disorder of pain processing. Evidence suggests that both the ascending and descending pain pathways operate abnormally, resulting in central amplification of pain signals, analogous to the “volume control setting” being turned up too high. Patients with FM also exhibit changes in the levels of neurotransmitters that cause augmented central nervous system pain processing; levels of several neurotransmitters that facilitate pain transmission are elevated in the cerebrospinal fluid and brain, and levels of several neurotransmitters known to inhibit pain transmission are decreased. Pharmacological agents that act centrally in ascending and/or descending pain processing pathways, such as medications with approved indications for FM, are effective in many patients with FM as well as other conditions involving central pain amplification. Research is ongoing to determine the role of analogous central nervous system factors in the other cardinal symptoms of FM, such as fatigue, nonrestorative sleep, and cognitive dysfunction.
Daniel J. Clauw, MD, Lesley M. Arnold, MD, and Bill H. McCarberg, MD: The Science of Fibromyalgia, Mayo Clin Proc. 2011 Sep; 86(9): 907–911.

The advent of imaging techniques capable of providing real time information regarding the way specific areas within the central nervous system react to painful (as well as non-painful stimulation) has provided valuable insight into the biological meaning of central sensitization in fibromyalgia. Thus, using functional MRI (fMRI), Gracely et al. were able to demonstrate that conditions which resulted in comparable subjective sensation of pain, resulted in activation patterns that were similar in fibromyalgia patients and controls; on the other hand, similar levels of pressure (which invoke higher levels of pain among fibromyalgia patients relative to controls) resulted in activation of different areas and caused greater effects in patients. Similarly Cook et al. showed that in response to painful stimuli, fibromyalgia patients had greater activity in the contralateral insular cortex than healthy controls, as demonstrated by fMRI.Thus, functional brain imaging such as fMRI has supplied fibromyalgia researches with a long-awaited tool for objective evaluation of pain. This tool enables further evaluation of various factors capable of influencing the functioning of the nervous system in fibromyalgia, ranging from pharmacological intervention to the presence of a significant other during testing.

It has not been found coherent evidence of the tissue pathology in fibromyalgia. Because of that the contemporary research focuses on exploration of the central (CNS) mechanisms of pain. 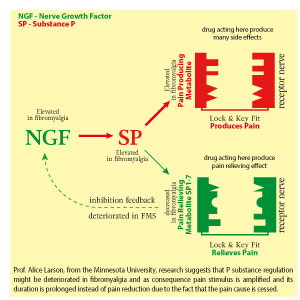 Central sensitization is an emerging biopsychosocial concept currently considered to characterize a wide spectrum of interrelated ‘functional’ disorders, which may subsequently be better defined as central sensitivity syndromes. Central sensitization constitutes a condition of general over reactivity of the central nervous system to a wide spectrum of stimulation. Clinical correlates which are particularly significant to the fibromyalgia syndrome include the phenomenon of allodynia, in which a normally un-painful stimulus is perceived of as painful and hyperalgesia, in which a normally painful stimulus is perceived of as more painful than expected. Additionally, central sensitization invokes prolonged electrophysiological discharge in response to stimulation as well as exaggerated response to various forms of stimulation such as noise, smell and chemical exposure. Various areas in the central nervous system are responsible for inhibiting ascending pain transmission within the spinal cord (e.g. the locus coeruleus*, cortico-reticular** system, brain stem and hypothalamus) through the activity of inhibitory neurotransmitters which include serotonin, norepinephrine, enkephalins, gamma-amino-butyric acid (GABA), and adenosine. A decrease in this pain inhibitory loop is an important component of the central sensitization syndrome. Separate areas of the central nervous system including the limbic system and the medial thalamic nuclei, are involved in the affective response of the central nervous system to pain.

† Sensitization – an amplified response to a stimulus resulting from repeated exposure to it. Peripheral and central abnormalities of nociception have been described in fibromyalgia. Important nociceptor systems in the skin and muscles seem to undergo profound changes in patients with fibromyalgia through unknown mechanisms. They include sensitization of vanilloid receptor, acid-sensing ion channel receptors, and purino-receptors. Tissue mediators of inflammation and nerve growth factors can excite these receptors and cause extensive changes in pain sensitivity, but patients with fibromyalgia lack consistent evidence for inflammatory soft tissue abnormalities. Therefore, recent investigations have focused on central nervous system mechanisms of pain in fibromyalgia. 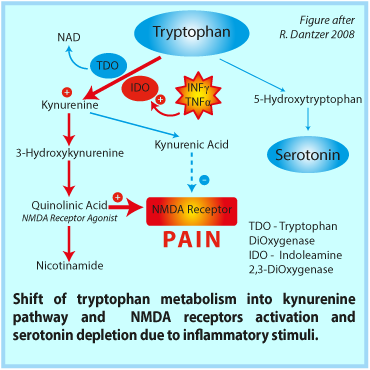 In addition to decreasing serotonin levels in the body, the kynurenine pathway also results in the synthesis of multiple metabolites that can have neurotoxic effects. These metabolites include 3-hydroxy-kynurenine (3-OH-KYN) as well as quinolinic acid. 3-OH-KYN exerts its damaging effects by increasing reactive oxygen species* (ROS) in the brain. This increase in ROS leads to oxidative stress and possibly neuronal apoptosis. Overproduction of ROS is linked to an increase in Monoamine oxidase (MAO) activity, which could deplete monoamine levels in the brain leading to a depressed mood. Quinolinic acid is a potent N-methyl-D-aspartate (NMDA) receptor agonist. Overstimulation of these receptors leads to an increased calcium influx into target neurons resulting in neuronal damage. Increased influx of calcium into cells may also lead to the generation of ROS. Both metabolites have been found to be elevated in certain neurodegenerative disorders such as Huntington’s disease and Parkinson’s disease