One has to underline that despite of certain similarity of several symptoms candidosis (systemic invasion of yeast fungi) it is not fibromyalgia syndrome. There are not present characteristic fibromyalgia features i.a. there are no so called → tender points, no widespread pain in periarticular tissue (joint surrounding tissue), no muscle stiffness and several other symptoms of fibromyalgia syndrome.

Several fungi (like e.g. Candida, Aspergillus, Cryptococcus, etc.) are widespread in the nature (water, soil, and home) and are not hazardous for healthy people. However, these fungi may cause serious illnesses in certain clinical circumstances. Weak immune system† may primarily promote development of these illnesses. Therefore we recommend in situation of impaired immune function and fungus infection → Immulina plus – natural and efficient preparation that may support fast restoration of immune function.

† The decreased immunity often may be transient and manifest i.a. in:

Serious weakness of the immune system (congenital and acquired) are called immune deficiencies and require specialised action of clinical immunologist. Immune system one can read about in our service → immunity.online.

Nearly every second person is Candida albicans carrier. This fungi – belonging to yeast type – do not give any symptoms in normal conditions. However, in decreased immune function, it may become threatening invader and foster disease in host organism. The symptoms depend on invaded place localization. The initial symptoms may comprise of: The initial symptoms may comprise of: digestion problems, gases, bloating, general exhaustion, weakness, tiredness, sleep disorder, increased sweating, mood fluctuation, reluctance to any form of activity, frequent common cold, irritability, and various inflammations. Hereinafter we have listed general symptoms that could be fund in case of systemic candidosis. However, symptoms are in random order and not according how frequent they appear:

*In the fibromyalgia course some diseases or problems occur much more frequently than they occur in the general population. This has been presented in the → figure. The prevalence of the various disorders that occur among fibromyalgia population (expressed in percentage) is presented inside internal oval and the prevalence (in percentage) of the same disorders in the general population is shown outside this oval.

You maybe would like to also see: → vulvodynia and → yeast vaginosis. 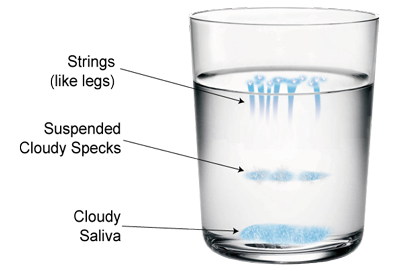 THE TEST:
In the evening, put a clear glass of water by your bed. First thing in the morning, briefly rinse your mouth, swallow, then gather some saliva in your mouth and spit into the glass of water (be sure to spit out saliva, not mucus). Keep an eye on the water for half an hour — especially the first few minutes. If you have candida overgrowth, you will see one or more of the following:

If, within three minutes after spitting into the water, you see “strings” hanging down, cloudy specks showing up in the water, or “debris” sinking to the bottom, you most likely have extensive overgrowth, which will require more candida-fighting action on your part.

If it takes longer than a few minutes for anything to show up, the candida is not as serious.
If the saliva just floats on top and the water stays perfectly clear, you most likely don’t have candida overgrowth.

Each of these phenomenon may mean that Candida albicans has overgrown.

How does this test works?

If you have candida overgrowth, it will show up in the saliva, a friendly environment for yeast. When you spit into the glass, the aerated saliva is lighter than water. However, candida is heavier than either. Whether it sinks as “legs”, falls to the bottom, or floats around in the water, all are indications of candida. The more you see, and the faster you see it, the more systemic the infection.

Candida concentrates in saliva overnight, so this test is most accurate first thing in the morning. I suggest rinsing out your mouth first, because, if you happen to be sleeping in a room with mold, you may have mold in your mouth from the room, and that could show up in the saliva too.

Some people claim this Candida test is not accurate, but that has not been experience of an author (→ Robert Harrison). Out of the thousands of times I’ve suggested that someone do the spit test, just to confirm that they had candida, only once did someone tell me that their test showed clear water and no debris, that they did not have candida, when it was obvious from all their symptoms that they had candida overgrowth. Among the many who tested positive that I’ve spoken with, ALL have had candida symptoms.

This screening test requirers confirmation in the microbiological examination.