What is Lyme disease?

*Lyme - and more proprely Old Lyme – it is a town in Connecticut, in the USA, where Lyme Borreliosis has been diagnosed as separate disease entity in 1975 for the first time.

The stages 3 and 4 of Lyme disease should be taken into consideration when differentiating. This may happen when an early stage has not been noticed or was miss diagnosed.

Early Lyme disease symptoms include flu-like illness (fever, chills, sweats, muscle aches, fatigue, nausea and joint pain) and very characteristic skin rash so called erythema migrans. This is the most common early symptom of Lyme disease (approx. 70 % of cases). In some patients borrelia infection may be associated with lymphocytic infiltrate of the skin. Lymphocytic skin infiltrate described by Jessner and Kanof in 1953, is a skin condition characterized by small, red, bumps on the face, neck, and upper back. The bumps usually last for several months or longer and can enlarge to create a red plaque. Typically, there are no other symptoms, although rarely, individuals may experience burning or itching. The symptoms may fluctuate between periods of worsening and periods of improvement. To see the pictures and to read more → Jessner lymphocitic skin infiltrate.

The cause of Jessner lymphocytic infiltrate is unknown. It is classified as a benign T-cell lymphoproliferative disorder. Some cases have been associated with borrelia infection, the cause of Lyme disease.

The early symptoms retreat within 3 months and an early disseminated stage develops in part of the patients.

Lyme disease diagnosis comprise of several tests that each has its own specificity. We receive test result from laboratory and go to see a doctor who renders received result. The essential parameter is so called reference norm. We may hear: result is in the normal range or is above or is below the norm. If the test was made for specific bacteria, fungus or virus result should determine whether we have specific infection (positive result or negative results). However, one has to underline that Lyme disease affects immune system so approx. 20 – 30 % of patients has false negative test for borrelia spirochaeta antibodies.

The Centers for Disease Control and Prevention (CDC) currently recommends a two-tiered testing approach: a conventional enzyme-linked immunoassay (ELISA) test, followed by a Western Blot test. The ELISA is a blood test that detects antibodies but does not test for B. burgdorferi itself. A positive result from this first-level screening may suggest current or past infection. The ELISA is designed to be very “sensitive,” meaning that almost everyone who has Lyme disease (and some people who do not) will test positive. If the screening test is negative, it is highly unlikely that the person has Lyme disease and no further testing is recommended. If the screening test is positive or inconclusive, a Western blot test should be performed to confirm the results.

Used appropriately, the Western blot test is designed to be "specific", meaning that it will usually be positive only if a person has been truly infected by B. burgdorferi. If the Western blot is negative, it suggests that the ELISA test was a false positive.

Other Diagnostic Tests for Lyme Disease

Lyme disease become so universal and frequent problem that several organisations have been created to support research and treatment and also to organize people involved in whole subject. One of such organizations is Global Lyme Alliance in Stamford, Connecticut and not very fare from Old Lyme town where disease has been described firstly. Click the link to visit their web site.

Symptoms of Lyme disease may begin a few days or weeks after infection. In many cases, you may not know that you have been bitten as ticks that carry Lyme disease are very small and their bites painless.

Stage 1 is also called "early localized Lyme disease" and may last for 1 to 4 weeks. You may have symptoms including:

Symptoms of stage 1 Lyme disease may not always be present. In some cases, Lyme disease symptoms may come and go.

The rash that occurs with Lyme disease occurs at the site of the tick bite. The rash itself is not usually itchy or be painful but may be warm to the touch. In people with light colored skin, the rash may appear to be pink or red, those with darker skin may have a rash that looks more like a bruise. 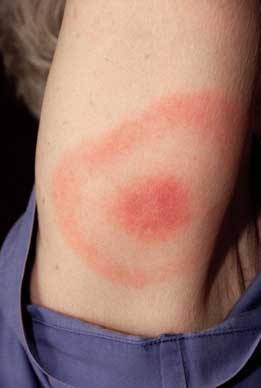 Symptoms of Lyme disease start one to two weeks after the tick bite. One of the earliest signs is a “bull’s-eye” rash, which is a sign that bacteria are multiplying in the bloodstream. The rash occurs at the site of the tick bite as a central red spot surrounded by a clear spot with an area of redness at the edge. It may be warm to the touch, but it isn’t painful and doesn’t itch. This rash will disappear after four weeks.

Notice: Erythema migrans occurs in approx. 30 % of cases. (and only in 10% of children). The flu-like symptoms may occur in this phase of disease. The Lyme disease may transform into disseminated stage if antibiotics would not be applied. The secondary symptoms may appear e.g. joint inflammation, neurologic or cardiologic symptoms, within couple of weeks up to several months time.

Early disseminated Lyme disease occurs several weeks after the tick bite. During this stage bacteria are beginning to spread throughout the body. It’s characterized by flu-like symptoms, such as:

During early disseminated Lyme disease you’ll have a general feeling of being unwell. A rash may appear in areas other than the tick bite, and neurological signs such as numbness, tingling, and Bell’s palsy can also occur. This stage of Lyme disease can be complicated by meningitis and cardiac conduction disturbances. The symptoms of stages 1 and 2 can overlap.

In some cases, those persistent symptoms have been dismissed by physicians as being psychosomatic, or caused by something other than Lyme disease. Physicians sometimes describe patients who have non-specific symptoms (like fatigue, pain, and joint and muscle aches). But now, researchers at the Johns Hopkins University School of Medicine acknowledge the existence of what is called Post-treatment Lyme Disease Syndrome (PTLDS). The cause of PTLDS is not known.

PTLDS is a severe complication of Lyme disease. The authors identified PTLDS using the Infectious Diseases Society of America (IDSA) proposed case definition. “Briefly, this definition relies on prior physician-documented Lyme disease, treatment with standard of care antibiotics, and the development of significant fatigue, widespread musculoskeletal pain, and/or cognitive difficulties that last for a period of at least 6 months, and began within 6 months of a Lyme diagnosis and recommended treatment.”

The term "chronic Lyme disease" (CLD) has been used to describe people with different illnesses. While the term is sometimes used to describe illness in patients with Lyme disease, in many occasions it has been used to describe symptoms in people who have no evidence of a current or past infection with B. burgdorferi (Infect Dis Clin N Am 22:341-60, 2008). Because of the confusion in how the term CLD in this field is employed, experts do not support its use (New Engl J Med357:1422-30, 2008). For more information, visit the National Institutes of Health Chronic Lyme Disease site.