What is Fibromyalgia and Who is Affected?

Fibromyalgia, also known as Fibromyalgia Syndrome (FMS), is a debilitating, chronic disease characterized by body aches, fatigue, and pain in specific points in the body. Insomnia, lack of concentration and mood disturbances may also accompany these symptoms. In recent years more is being understood about the disease and its causes and diagnosis.

According to the medical dictionary: fibromyalgia is a neurosensory disorder characterized by widespread muscle pain, joint stiffness, and fatigue. The condition is chronic (ongoing), but pain comes and goes and moves about the body. The disorder is often misdiagnosed or unrecognized and is and often complicated by mood and anxiety disorders.

Fibromyalgia syndrome is also subject of keen psychiatric interest. Dr. Bradley* explained that fibromyalgia may be part of a group of affective spectrum disorders (ASD). The ASD hypothesis proposed by Hudson† and colleagues suggests that this group includes, but is not limited to, 10 psychiatric and 4 medical disorders that share 1 or more physiologic abnormalities important to their aetiology. These include inherited factors that may contribute to enhanced pain sensitivity, diminished pain inhibitory function, or mood disorders. Studies of patients, as well as their first-degree relatives, with fibromyalgia or rheumatoid arthritis have provided evidence to support the ASD hypothesis. For example, Arnold** and colleagues reported that the first-degree relatives of patients with fibromyalgia, compared with those of patients with rheumatoid arthritis, more frequently met diagnostic criteria for fibromyalgia or major depressive disorder (MDD) and exhibited a greater number of sensitive tender points (i.e., enhanced pain sensitivity). Hudson† and colleagues further examined data from this family study and found that fibromyalgia co-aggregated with 1 or more other forms of ASD whether mood disorders were included (p = .004) or not (p = .012). These findings suggest that, consistent with the ASD hypothesis, (1) heritable as well as environmental factors may contribute to family aggregation of pain sensitivity in fibromyalgia, (2) fibromyalgia co-aggregates with other affective spectrum disorders, and (3) these disorders may share heritable physiologic abnormalities.

American College of Rheumatology had appointed a group medical doctors that formed Multicenter Criteria Committee who defined criteria for the classification of fibromyalgia in 1990. This has been presented in the bookmark  → diagnosis . 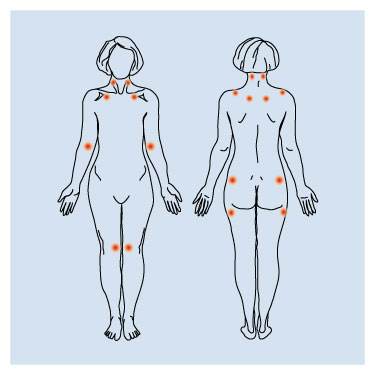 Fibromyalgia belongs to the group of illnesses defined as "soft tissue rheumatism" or "non joint rheumatism". The illness belongs to the most common peri-articular* chronic pain non-inflammatory disorder. The widespread pain is accompanied by hyperaesthesia in characteristic localization – so called tender points. Moreover, heavy, general, and chronic tiredness (chronic fatigue syndrome), sleep disturbances, and low mood or depression often occur. All these symptoms defined as the major criteria are accompanied by other various and more or less intense symptoms and disorders called as vegetative or functional.

It is estimated that, even in the US where fibromyalgia awareness is relatively high, it takes approximately five years from first symptoms to the final diagnosis. Patient sees at least 15 doctors of various specialities in that time. The variety and number of symptoms accompanying fibromyalgia is a real nightmare for patients and causes frequent and unproductive visits to different specialists and various examinations like blood tests as well as imaging scans (x-rays, NMR**, CT scans†, and USG scans‡.

*peri-articular means joint surrounding tissue
**NMR - nucelear magnetic resonance or magnetic resonance imaging is a medical imaging technique used in radiology to form pictures of the anatomy and the physiological processes of the body in both health and disease.
†CT - computed tomography scan is imaging technique that can reveal anatomic details of various internal organs and structures that cannot be seen in conventional X-rays.
‡USG - medical ultrasound (also known as diagnostic sonography or ultrasonography) is a diagnostic imaging technique based on the application of ultrasound. It is used to see internal body structures such as tendons, muscles, joints, blood vessels, and internal organs. Its aim is often to find a source of a disease or to exclude any pathology. The practice of examining pregnant women using ultrasound is called obstetric ultrasound, and is widely used. 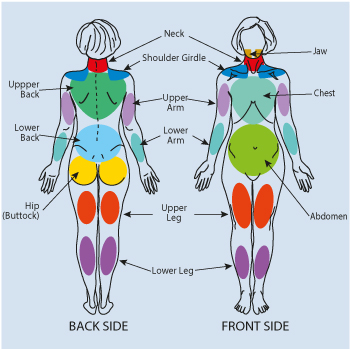 It is important to understand the impact of this illness on patient, her/his family, and community, when investigating fibromyalgia epidemiology. The modified new ACR diagnostic criteria of fibromyalgia in 2010 enables to perform broad epidemic research in different countries and continents without a necessity to examine tender points. This also would make possible to evaluate socio-demographic determinants of fibromyalgia and its coexistence with other disorders.

On the base of many (several dozen) epidemic survey performed according to fibromyalgia diagnostic criteria published by ACR in 1990 the average rate of fibromyalgia prevalence was 2.7 % of the total world population.

Juvenile primary fibromyalgia syndrome (JPFS) is a musculoskeletal pain syndrome characterized by multiple discrete tender points (TPs), fatigue, and sleep disturbance in the child and adolescent. JPFS can be chronic in nature and can necessitate a multidisciplinary approach to the ongoing treatment of the disorder. The pain experienced is modulated by factors such as activity, anxiety, stress, and weather changes.

The diagnosis is made on the basis of the presence or absence of specific criteria that have been found to be consistent with those who experience JPFS. The chronic nature of fibromyalgia in the pediatric population suggests consequences for psychosocial development and implies a more difficult transition from childhood to adulthood.

Fibromyalgia is one of the most common chronic pain conditions. The disorder affects an estimated 3 – 6% of the world population (7.6 billons in 2018). This gives from 228 million even up to 456 million all over the world. However, it varies from country o country. The diagnosis of fibromyalgia is difficult and there might a number of false positively or false negatively misdiagnosed people.

Fibromyalgia is most prevalent in women. Between 75 – 90 percent of the people who have FM are women. Fibromyalgia also occurs in men and children of all ethnic groups. The disorder is often seen in families, among siblings or mothers and their children. The diagnosis is usually made between the ages of 20 to 50 years, but the incidence rises with age so that by age 80, approximately 8% of adults meet the American College of Rheumatology classification of fibromyalgia.

Fibromyalgia percentage prevalence is presented is some contries, hereinafter:

Fibromyalgia may affect anybody regardless of age, gender, race, and territory. However, women are affected 5 – 10 times more often. Majority of patients is between 30 - 60 years, also in productive age. 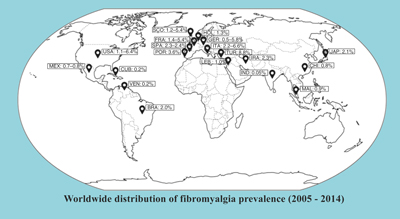 The literature shows values of fibromyalgia prevalence in the general population between 0.2 and 6.6%, in women between 2.4 and 6.8%, in urban areas between 0.7 and 11.4%, in rural areas between 0.1 and 5.2%, and in special populations values between 0.6 and 15%. This literature review update shows a significant increase in fibromyalgia prevalence studies in the world. The new 2010 American College of Rheumatology criteria have not been widely used yet and the COPCORD (Community-oriented program for control of Rheumatic Diseases) methodology has increased the quality of studies on the prevalence of rheumatic diseases in General. (source: Pasqual Marques A, De Sousa A, et al. Prevalence of fibromyalgia: literature review update; Rev.Bras.Reumatol. 2017;57(4):356–363)