What are the Fibromyalgia Symptoms?

Fibromyalgia syndrome comes with large variety of symptoms. Symptoms of fibromyalgia come in many shapes and sizes and their intensities is related to various exogenous/extrinsic and endogenous/intrinsic stress factors just to mention some of them: injury, cold, humidity, infection, psycho-social factors. The variety and relatively low specificity of symptoms makes that fibromyalgia is often confused with other conditions and its diagnosis is difficult. One has to underline that fibromyalgia is non-inflammatory illness and due to this fact there are not present clinical symptoms of inflammation* neither are present lab results typical for inflammation.

Fibromyalgia has many symptoms that tend to vary from person to person. The main symptom is widespread pain.

There may be periods when your symptoms get better or worse, depending on factors such as:

If you think you have fibromyalgia, visit your GP. Treatment is available to ease some of the symptoms, although it's unlikely they'll ever disappear completely.

The main symptoms of fibromyalgia are outlined below.

If you have fibromyalgia, one of the main symptoms is likely to be widespread pain. This may be felt throughout your body, but could be worse in particular areas, such as your back or neck. The pain is likely to be continuous, although it may be better or more severe at different times.

Pain is the main and dominating symptom of fibromialgia. The pain is chronic – lasts longer than 3 months and it is disseminated (widespread) that means affects at least three from all four body quadrants. The pain has wavy character with intervals of exacerbation and mellowing. Patients may very suggestively and dramatically describe their pain:

Keeping a pain diary is a good way to track your pain over time and will help you be more specific at your doctor appointments. You can also use the American Pain Foundation’s L O C A T E S memory aid. It is a good way to remember how to describe your pain. Each letter of L O C A T E S stands for information you should tell your doctor:
L – Location of the pain and whether it travels to other body parts.
O – Other associated symptoms such as nausea, numbness, or weakness.
C – Character of the pain, whether it’s throbbing, sharp, dull, or burning.
A – Aggravating and alleviating factors. What makes the pain better or worse?
T – Timing of the pain, how long it lasts, is it constant or intermittent?
E – Environment where the pain occurs, for example, while working or at home.
S – Severity of the pain. Use a 0-to-10 pain scale from no pain to worst ever.

Physical activity induces (amplifies) fibromyalgia pain and this, together with chronic fatigue, leads to the characteristic fibromyalgia feature – so called exercise intolerance.

Pain in fibromyalgia most often affects periarticular (joint surrounding) tissues: muscle tendons, muscle origins (bone attachments), ligaments, fascias, and joint surrounding structures (synovial bursae, tendons’ sheaths). Due to such localization it often mistaken as join pain but it is not. Joints normally are not affected in fibromyalgia. However, if pain and stiffness last for pretty long time it may lead to joint changes in years.

Exceptional Sensitivity to the Pain Stimuli

People suffering from fibromyalgia reveal exceptional whole body sensitivity (vulnerability) to different stimuli, so even the lightest touch may cause pain. If you e.g. broke your nail – the pain will be much stronger and last much longer than normally.

This phenomenon is deffined as:

Moreover, fibromyalgia patient may show exaggerated reaction to various stimuli and situations like for example smoke, some food, bright light, some sounds. Exposition to such stimuli may trigger or exaggerate other fibromyalgia symptoms.

Fibromyalgia is known to cause muscle pain which can contribute towards muscle stiffness. Stiffness in the joints or muscles can restrict our mobility, having a debilitating impact on our day to day lives.

Stiffness of muscles and joints is the feeling that a joint will not easily move and does not feel comfortable. It is often accompanied by pain, and it can be hard to bear weight on the affected joint. For fibromyalgia sufferers, the stiffness is often worse in the morning, making it difficult to get going and ready for the day ahead. This can have a negative effect every day activity.

As muscle pain is a primary symptom of fibromyalgia, this may contribute to muscle stiffness. Generally when a joint feels sore, you will be reluctant to move it. However, this can mean that you lose elasticity and flexibility in the joint, causing it to progressively become stiffer. During the night, we do not use or move our limbs as much as during the day, which may explain why stiffness is often worse in the morning.

Additionally, some studies suggest that the arteries of fibromyalgia patients, which should be flexible and strong, are often weaker and less efficient. This leads to poor circulation and a less efficient blood supply to muscle and joints, another possible contributor to stiffness.

Mental and cognitive symptoms are commonly accompanying fibromyalgia. Just to mention to most frequent:

According to different sources 20 – 70 % of fibromyalgia patients manifest psychopathological symptoms like anxiety state, nervous tension, personality disorder, psychasthenia†, dissociative disorder‡, or depression. Their revelation depends on genetic propensity. It is believed that they belong along with vegetative and functional symptoms to integral clinical picture of fibromyalgia. Fibromyalgia is sometimes wrongly perceived as a "pain mask" of depression. This question is presented in bookmark → Fibromyalgia or Depression

*Inflammation is characterized by five cardinal signs: rubor (redness), calor (increased heat), tumor (swelling), dolor (pain), and functio laesa (loss of function). The first four signs were first established by Aulus Cornelius Celsus in his work De Medicina (1st Century BC), and are known by the name Celsus tetrad. The fifth sign – functio laesa – was given by Aelius Galenus, a Greek physician, surgeon and philosopher in the Roman Empire 2nd/3rd century AD.

**A nociceptor is a sensory neuron that responds to damaging or potentially damaging stimuli by sending “possible threat” signals to the spinal cord and the brain. If the brain thinks the threat is credible, it creates the sensation of pain to direct attention to the body part, so the threat can hopefully be mediated. This process is called nociception.

†Psychasthenia is a psychological disorder characterized by phobias, obsessions, compulsions, or excessive anxiety 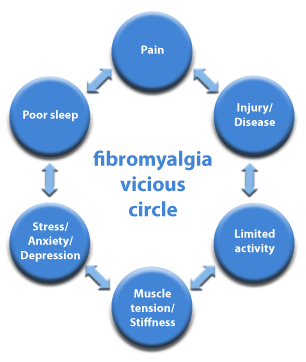 Fibromyalgia pretty often affects sleep. It is a complex issue because poor sleep that lasts for years may lead to cognitive problems, chronic tiredness, and other disfunctions. This has been further presented in section → Sleep Disorders.

The question regarding depression and fibromyalgia has been presented in bookmark → Fibromyalgia or Depression.

Cognitive problems are linked to several mental processes like thinking, learning, and also remembering, memorising and facts association. Patients with fibromyalgia may experience:

Cognitive dysfunction in patients with rheumatic disease encompasses a range of impairment. Their prevalence, co-occurrence, and impact on symptom severity were assessed in 57 patients with fibromyalgia (FMS) and 57 patients with rheumatic disease without FMS. Information pertaining to memory decline, mental confusion, and speech difficulty was extracted from questions embedded in a health questionnaire and a blind retrospective chart review. Pain, morning stiffness, fatigue, and sleep difficulty were established on a 0- to 100-mm visual analog scale. Variables of mental confusion, fatigue, tension, depression, anger, and vigor were assessed using the Profile of Mood States.Compared with the non-FMS sample, patients with FMS complained more often of memory decline (70.2-24.6%), mental confusion (56.1-12.3%), and speech difficulty (40.4-3.5%). Memory decline and mental confusion were coupled more often in patients with FMS (50.9-8.8%). Patients with FMS with this combination of cognitive problems reported more pain (76.0-45.4%), stiffness (79.7-43.7%), fatigue (79.6-52.6%), and disturbed sleep (59.2-36.6%) compared with patients with FMS with memory problems alone. Patients with rheumatic disease substantially differ in cognitive vulnerability, with patients with FMS at considerably higher risk for cognitive difficulty. More importantly, the prevalence of a combined disturbance in memory and mental clarity is high and closely associated with the perception of increased illness severity and diminished mental health in FMS. That this linkage has the possibility of having a great deal to do with an important clinical variant of FMS underscores the need for greater clinical recognition of this underrecognized pattern and for further research.Patients with fibromyalgia frequently report memory and concentration problems, especially if asked about them. Clinicians could judge these complaints as similar to adult attention deficit syndrome and reassure the patient. Trying medication to improve attention and concentration is sensible but untested in fibromyalgia.

The impaired function of the autonomic nervous system* (ANS) has been found in fibromyalgia. The autonomic nervous system consists of two adverasative (counteracting) compounds: sympathetic system and parasympathetic system. The imbalance between these systems is responsible for the vaste majority of so called vegetative symptoms of fibromyalgia. The most common vegetative symptoms of fibromialgia belong to three groups: (1) urogenital symptoms, (2) digestive tract symptoms, and (3) cardio-vascular symptoms.

Urinary and pelvic complaints are common symptoms of fibromyalgia, particularly in women with the disease. Bladder incontinence, urinary frequency, and painful sexual intercourse are just a few of the urinary disorders and pelvic symptoms that fibromyalgia can cause.

Some symptoms like a sudden urge to urinate. The urge may be difficult to stop, and may lead to the involuntary loss of urine (urge incontinence). These symptoms are defined as overactive bladder syndrome (OAB). See the bookmark → OAB (OverActive Bladder)

If you have fibromyalgia and think that your symptoms may indicate a problem with your urinary tract or pelvic area, consult with your doctor. Your pain and discomfort can be minimized, helping you to live a more active and fulfilling life.

Raynaud's Phenomenon – is pretty common in people who have fibromyalgia. Raynaud’s seems to be a result of over-sensitive nerves that respond to normal triggers too easily and dilating your blood vessels, limiting the flow of blood.

Mitral valve prolapse (MVP) - The prevalence of MVP in fibromyalgia population is significantly higher (p less than 0.0001) than in the general population.
Heart Rhythm Disorders - One of the most common events experienced by FM patients during tilt table testing is postural orthostatic tachycardia syndrome, which is defined as a heart rate increase of more than 30 beats per minute after more than 3 minutes of standing upright.

**Gastric Reflux Syndrome or gastroesophageal reflux disease (GERD), also known as acid reflux, is a long-term condition where stomach contents come back up into the esophagus resulting in either symptoms or complications. Symptoms include the taste of acid in the back of the mouth, heartburn, bad breath, chest pain, vomiting, breathing problems, chronic cough, and wearing away of the teeth.